Nathan "Nate" Cochrane photographed our Photo of the Day in the gold rush town of Hill End, NSW, Australia. He light painted the tree by way of a Canon 580 EX II speedlite, with several pops on either side of the tree and a couple up its trunk, at full burst, to overpower the street lights and reveal the sinuous play of its branches.

History: Hill End holds a special place in the hearts of Australian photographers, because in many ways this was a birthplace for photography in this country. In 1872, Hill End gave up the biggest gold nugget ever pulled out of the ground anywhere in the world, which was as tall as its putative finder, Bernhardt Holtermann. The German immigrant parlayed his wealth into significant political clout in the colonies; but, ever eager to give something back to his adopted country, he financed a massive undertaking to document the entire town on 8x10 wet plate.

The Holtermann Collection encompasses some 3500 of an estimated 15,000 glass negatives that originally detailed street by street, house by house, just about every square inch of the town and the minutiae of life at the height of the rush. This was roughly 150 years before Google Streetview.

Nate continues to blog extensively on Holtermann, the photography he financed, and has even found his lost resting place.

Challenges: Nate's biggest challenge for this photograph was the cold. It drops to below zero degrees Celsius (32 Fahrenheit) at Hill End in winter and this night there was also a strong fog that curtailed a longer shoot because he had to wipe the lens dry between exposures. The sodium-vapor street lamps threw up strange colors, but rather than blast them out, Nate used their tinge to warm the landscape, which he thinks added something special to the final image.

Satisfaction: Nate was out to get a different shot that night. He was looking for images of the galaxy rising over one of the many extant churches in town. But when he saw this tree he knew this was the image he had to make. "I've been back there to shoot the tree at other times of the year and have achieved technically superior shots but this is still the one that ‘clicked’ in my head. I used the lessons I learned that night to inform other shoots, and this is still my reference before I head out for night shoots."

Nate continues, "While I have no proof, I'd like to think this tree was around when Holterman’s photographers, Beaufoy and Merlin, were snapping with their view cameras, so I'm completing a circle of life and photography. People tell me they love this image and that it means different things to them. That's the power of any art—once the artist releases it to the world, it takes on a meaning and a life of its own that could not have been anticipated when it was conceived and executed."

Tools and Software: The Gitzo Traveler tripod is Nate's constant companion when shooting at night because it's light and sturdy. He never goes anywhere without his Giotto Rocket Air Blower, in order to keep his camera's imaging sensor free of dust and spots. When shooting at night it's helpful to have a few LED torches (he prefers the LED Lenser) to see what's in one's bag and to avoid stumbling into holes in the ground (there are many hidden mine shafts still in the town). He use a laser pointer to assist in focusing. "The bright, pin-point reflected light is easy for the camera’s auto-focus to see, and it’s easier than performing hyperfocal calculations in my head," says Nate.

A technical issue familiar to anyone who shoots stars against landscapes, is trying to keep the foreground sharp while letting in enough light through a wide aperture. The above image was shot all in camera, with limited post processing, so while the focus of the tree is sharp, much of the rest of the foreground is soft. "Since I made this photograph, I’ve worked on blending images, shooting separately for the ground and the sky and bringing them into Photoshop for post-processing," says Nate. 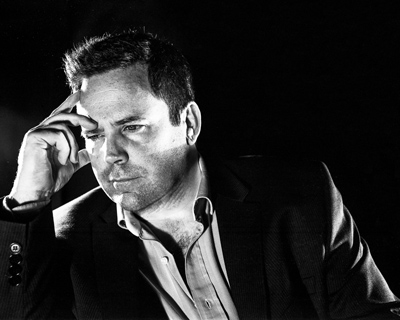 Nate Cochrane lives in Sydney, Australia. He is an Australian technology journalist, photographer and media consultant who contributes to the Sydney Morning Herald, a Fairfax Media broadsheet newspaper, among other publications. He was previously editor-in-chief for IT publications CRN Australia, SC Magazine and iTNews.

As a journalist and professional photographer, who specializes in reporting on technology and shooting for news, Nate enjoys the challenge of shooting low-light subjects. His work has been exhibited in Sydney at the Australian Centre for Photography, the Head On Photo Festival and appears in the Sydney Morning Herald and Melbourne's The Age newspapers. "I'm blessed that my calling enables me to travel the world, shooting and reporting on what I experience," reports Nate.

You can find more of Nate's photos and writing at Flickr, on his blog and website, which is currently running a special gallery of low-light images, including more from the Hill End set. (Note: for a limited time, readers of this blog can receive 25% off the list price of prints fulfilled through his website, by entering the code "21214-ITN-BLOG" near the end of the checkout process.)